So, after a long hiatus, your Bread Maiden has returned to report on some new adventures in bread. While I have as little time as always, I will try and update this thing more often.

So, picnic bread. You remember it:

The original version came out fine, but I was disappointed that so few of the ingredients contributed to the overall flavor. Plus the taste of the anchovies became too much to bear after only a few days. Mr. Bread Maiden had the inspiration to add bleu cheese and sausage, so we agreed that a Round Two was necessary.

The recipe is the same as the first one, but I decided to throw a little whole wheat flour into the dough. I also added bleu cheese, one hard-boiled egg, plenty of sausage, ground beef, and barbeque pork, and little onions.

I changed up the pattern and added way more toppings. I put the cheese in the middle, then made an inner inside ring of egg and meat. Then I put the top layer of dough in place and made an outer ring of toppings. 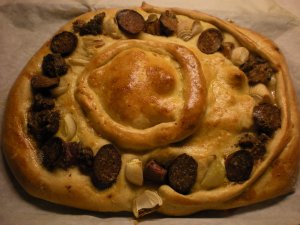 And here’s the inside:

Today I ate the most delicious picnic bread ever. Also Mr. Bread Maiden winked at me. I wonder if he likes me?