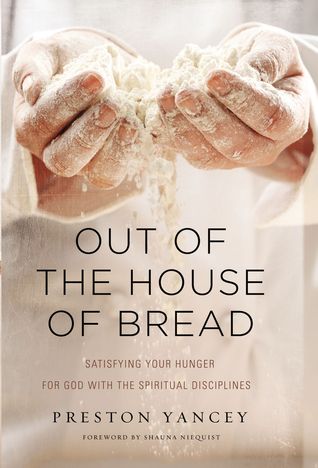 Now that I’ve written a more literary review of Out of the House of Bread, the latest book by Preston Yancey, you all might be curious to learn why it inspired me to bake the same bread recipe nine (9!!!!) times.

Obviously, I like a challenge.  I bake bread most weeks; I would say I average a loaf a week at least.  I feel pretty confident as a baker.

But as good as any baker can be, I also know that you can’t really get a feel for a recipe if you only make it once.   I think this can only happen successfully if you bake a recipe a minimum of three times.  You have to get inside the head of the recipe writer, and get a sense of what they want out of the recipe. What are their preferences? What tricks and techniques have they picked up over the years?  Why in the heck was that step included?  Those are the things I think about when I read a recipe for the first time.  Baking a new recipe is almost like dating, in a way.

When I made Preston’s recipe for the first time, I was really confused.  He has written the recipe for someone who has absolutely no familiarity with breadbaking, which was challenging for me to read because I wanted to skip over the parts about how to mix, how to shape, how to bake, etc.  This led me into trouble because I would forget steps that turned out to be important.  I’ve been baking bread for ten years and I’m a little ornery; justify to me why a step is necessary and I’ll do it.  If it seems like a waste of time, I won’t.

grinding the salt was a waste of time

As you can see, it took me practically the entire nine attempts to reach a brokered peace with Preston’s methods.  It was not a surrender – I brought several improvements to the table once I had a sense of the recipe.  But this isn’t about me.  It’s about the recipe, and there were several techniques that I used for the first time because of Preston’s book.

6. Finally, I really came to like Preston’s three-step baking procedure.  It’s in three sets of fifteen minutes: First, bake the dough for 15 minutes with the dutch oven lid on at 500 degrees F.  Then, bump the temperature down to 375 degrees F for 15 minutes.  Then remove the lid and bake the final 15 minutes.  I don’t know why I like it, but I do.

Even though I didn’t end up baking it exactly as Preston specified each time, I think the lessons I learned by baking his bread nine times were more universal: there’s more than one way to make a loaf of bread, there’s always more to learn, and it’s good to slow down sometimes and really focus on one thing, experience it and letting it be your singular focus for a while.  You might see all the posts I write and think I make new breads every time, but I have my handful of favorites that I make time after time, and I find joy in the familiar each time.

I hope you enjoyed this post, and that it inspires you to take on a challenge in your life.  It doesn’t have to be baking, but let me know in the comments if it is!