Every year for Superbowl Sunday, my church has a chili cook-off.  I enter every year, and I’ve never won.  But I think that’s about to change this year.  I can feel it.

Most years, I use a traditional chili recipe.  I like one from the Joy of Cooking 1997.  Last year I took inspiration from Mexican mole sauce and added chocolate and cinnamon.  People really liked it, and I came in second place.  But I want to clinch it this year.

This year, I’m taking what I’ve learned in previous years, and combined two non-chili recipes to get at a recipe I think takes the best from both.

Ok, with all that said, here’s what my thought process was:

When I thought about my chili last year, my biggest disappointment was with the decision to use ground beef.  The texture wasn’t right for chili, and it fell apart to the point it looked more like Bolognese sauce than chili.  When I thought about what I wanted the meat to be like, I envisioned ropa vieja, a dish popular in Puerto Rico and Cuba.  In particular, I wanted the chunky strands of meat.

Where do those long strands come from?  Most ropa vieja recipes use flank steak.  But as this blogger points out, flank steak is problematic for low and slow cooking like, say, chili: 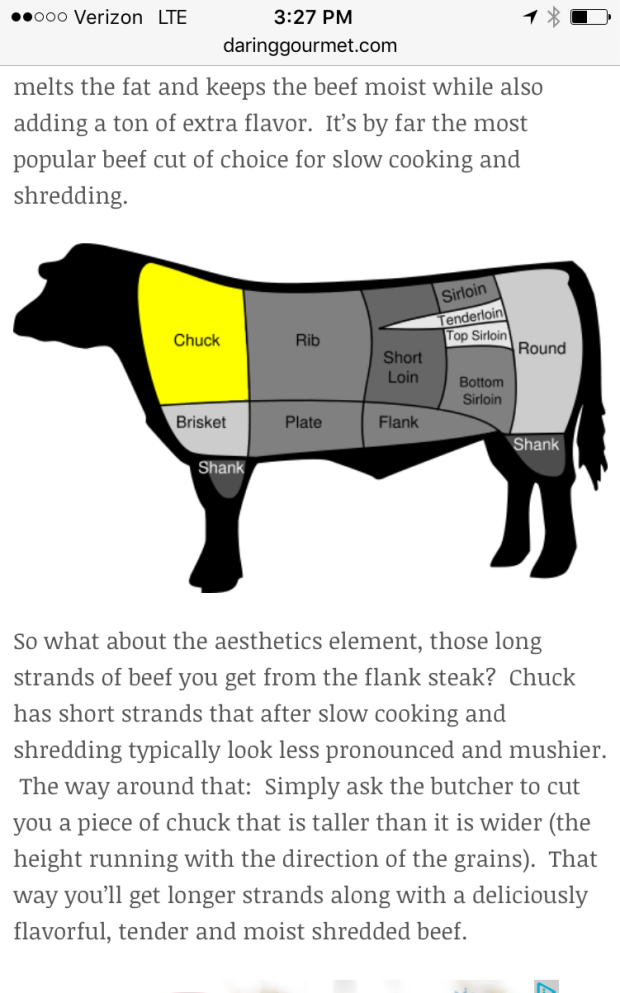 This blogger decided to use chuck in her ropa vieja, but for my chili I decided to use brisket instead.  It is easier to cook for a long time but doesn’t fall apart like ground beef.  I seared the brisket on all sides, cut it into big chunks the size of two fists, then cooked them in a slow cooker on low with sliced red onions and beef broth overnight.  The next morning, the meat was incredibly tender and shreddy, and the beef broth was super flavorful.

The other recipe I used was one I found on Epicurious.com when I searched for chili.  This recipe came up for some reason:

I liked the idea of a tomato and black bean sauce, so I nixed the meatballs and made the rest of the recipe mostly as written.  At the point where you are supposed to add the meatballs to the sauce, I shredded the brisket and added it instead.  I particularly liked the addition of crispy chorizo at the end.

Ok, that’s enough introduction.  For a big ol’ pot of chili, you will need:

1/2 a beef brisket, the fatty half

Wish me luck, people!  By the time this is published I’ll already know the results from the cook-off, so I’ll let you know how it goes.