Sorry for the long hiatus, friends!

I didn’t stop baking, I just took a little break from blogging about it.  I hope this post will jump-start the creative process again! 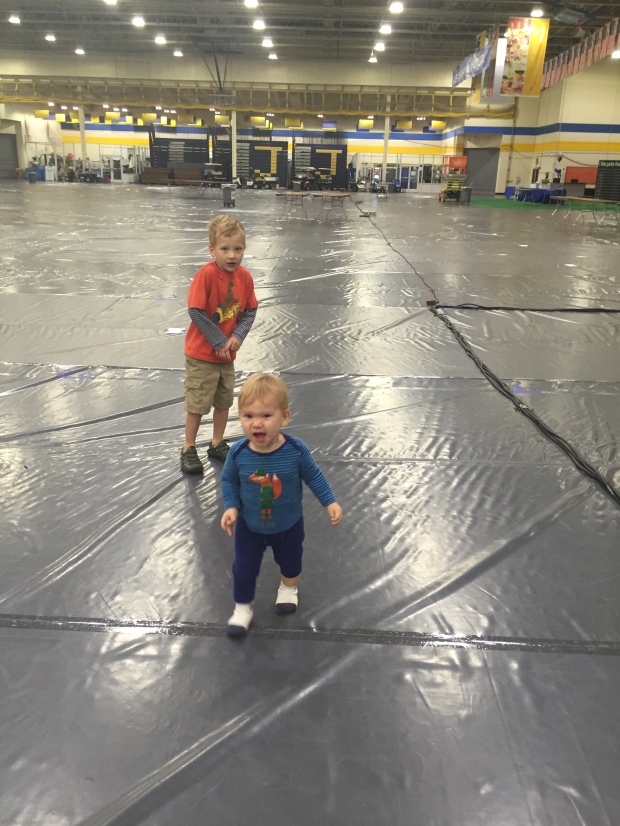 The boys dropping off my breads at the Fair last year.  Look at how much they’ve grown!

This year, as I have off and on for the past six years, I submitted an entry to the Arlington County Fair’s baking competition.  Every year somehow I end up getting 2nd place, but it doesn’t bother me.  Mostly I enjoy the challenge and getting to compare my bakes against the other entries. 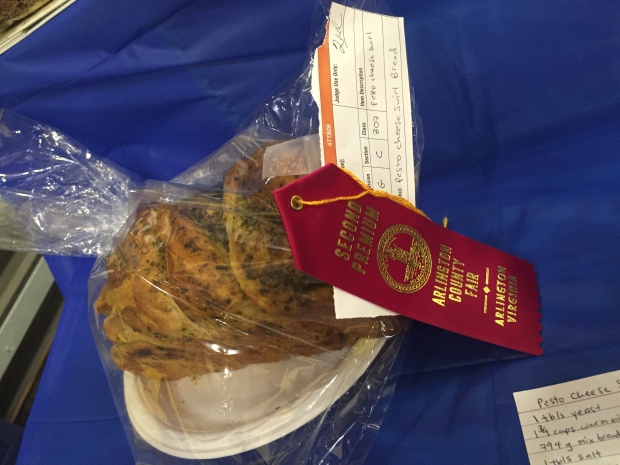 The thing that was different this year was that my older son, Little Bread Dude, decided he wanted to enter the competition as well.  We brainstormed a recipe and decided on the Hide and Seek Muffins from Mollie Katzen’s amazing Pretend Soup cookbook for young children.  I made sure he knew he would have to make and do everything himself, and he seemed ready for the challenge!

So that left me trying to figure out what to make.  I’d been thinking about our employee bake-off and how to wow the judges of that competition, so I decided to use the County Fair as a trial-run for our employee bake-off.  If the Fair judges liked my recipe, I would use it again.

Based on talks with several friends, I decided to make s’mores kolaches.  It seemed easy; after all, it’s just a soft dough wrapped around chocolate and marshmallows. What could go wrong? 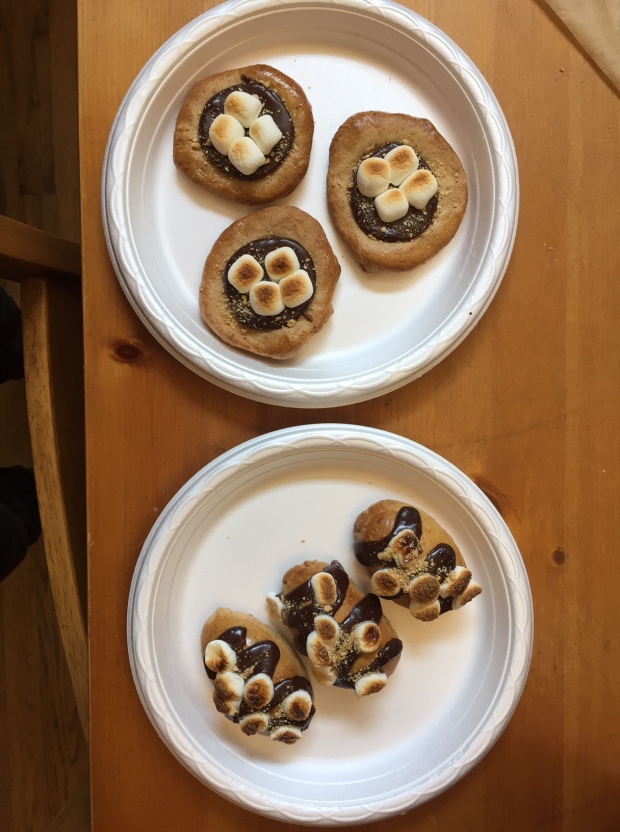 Plenty, as it turns out.  I tried whipping up my own dough with crushed graham crackers and ended up with a tough dough more resembling a pie crust than a soft bread dough.  I tried to make it work (see above) but it just wasn’t happening so I scrapped it and started over.  My second dough, based on this recipe, was much better.  I added half the amount of crushed graham crackers I had before, as well as extra molasses, honey and cinnamon and it worked out well. 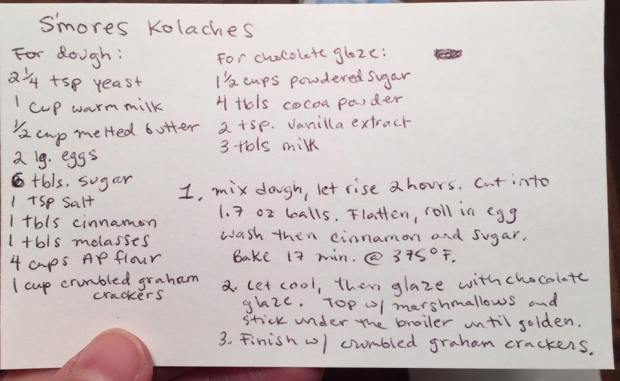 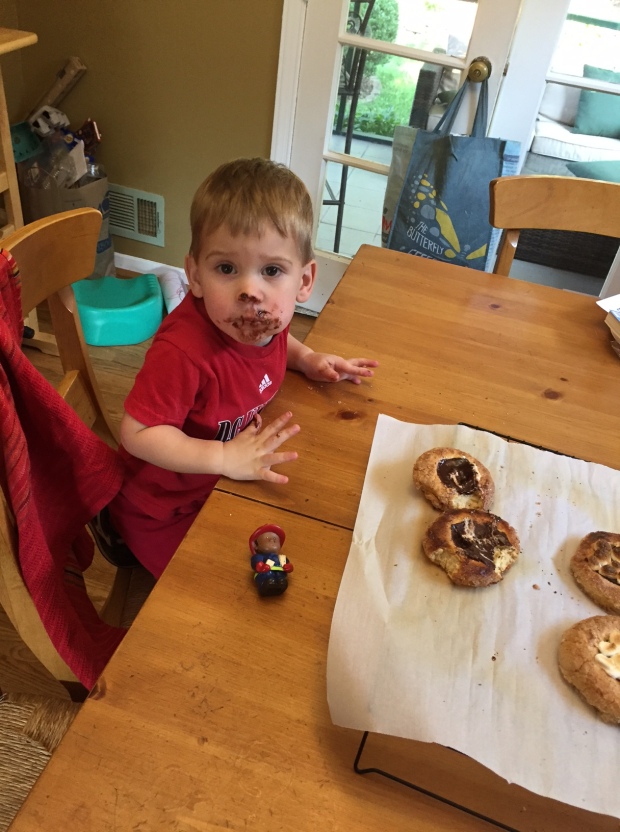 Each step presented its own challenges. I gave up on the idea of the filled kolaches because the marshmallows would disappear into the dough when they cooked, leaving a large gaping hole.  I tried making chocolate mousse but it didn’t set.  The chocolate glaze ended up working well, but I wish I hadn’t put so much effort and time into that mousse!  Then there was getting the right amount of roast on the marshmallows.  I also rolled my kolache dough in egg, then cinnamon and sugar to get more graham cracker flavor.  I made enough kolaches (more than enough!) so I could pick the best ones to enter to the Fair.

Once my kolaches looked right, then it was time to help LBD with his muffins.  I set out the tools and ingredients he would need, then let him work.  I also took videos in case there was a dispute over whether or not he had made them himself.  I thought the biggest challenge would be using a knife to core the strawberries, but he was the most proud of cracking the eggs himself!

I was so proud of him and all his hard work!  We packed them up and woke up early the next morning to drive them to the Fair.  The whole next day I was so nervous to find out the results.  I didn’t really care about how I did, but I wanted to prepare myself to comfort LBD if he didn’t win anything. 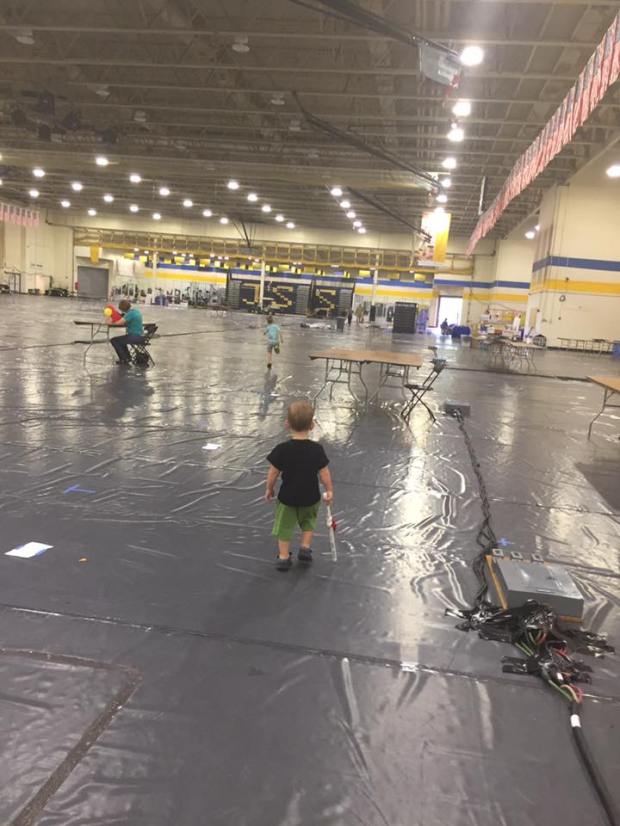 Imagine our surprise when he won Reserve Grand Champion! 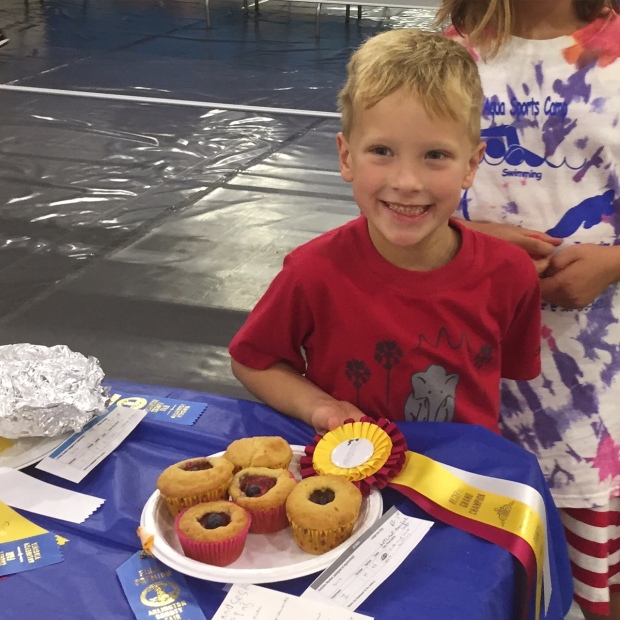 smiling from ear to ear

To explain a bit about the awards process: you enter the Fair under a category within baking.  Say, for example, muffins.  If you win first place in muffins, then your dish is judged among all the first place winners in your age bracket (LBD’s was 6 and under).  So he won among all the 6 and under bakers.  He was pretty excited about it, as you can tell.

And me?  Well, you guessed it:

Another second place ribbon.  But to me the best part of the Fair was that LBD enjoyed it and wants to enter again next year (in the 7 – 12 year old category).  We attended the awards ceremony on Sunday and everyone was so impressed to see a 6-year-old baker.  I hope he continues to enjoy it even if he doesn’t win. 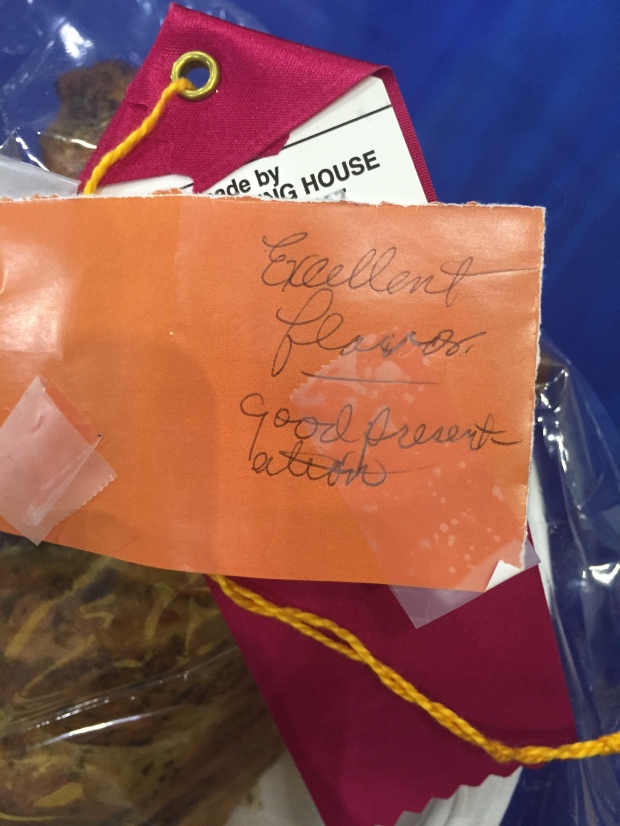 ***Edited to add*** I haven’t documented my entries every year, but if you want to read my other posts about entering the County Fair, here are the links:

Turns out I didn’t always win second place after all!