As I mentioned in a previous review, I’m looking for a true beginner’s book of bread, one that introduces all the ingredients (flour, water, yeast and salt) as well as the hows and whys of bread-making and baking.  I want a book that is comprehensive yet not overwhelming.  It should include some basic recipes that are easy to follow.  So I checked out all the library books I could find on bread baking and am working my way through them.

52 Loaves by William Alexander is the second on my list.  As soon as I opened it, I groaned.  It had not one gimmick (2010 was the year of the “year of the…” craze) but two: it was structured based on the seven daily monastic prayers.  I’ve read at least four books where the author uses spiritual practice or daily prayers as the structure, and it’s getting tiresome. 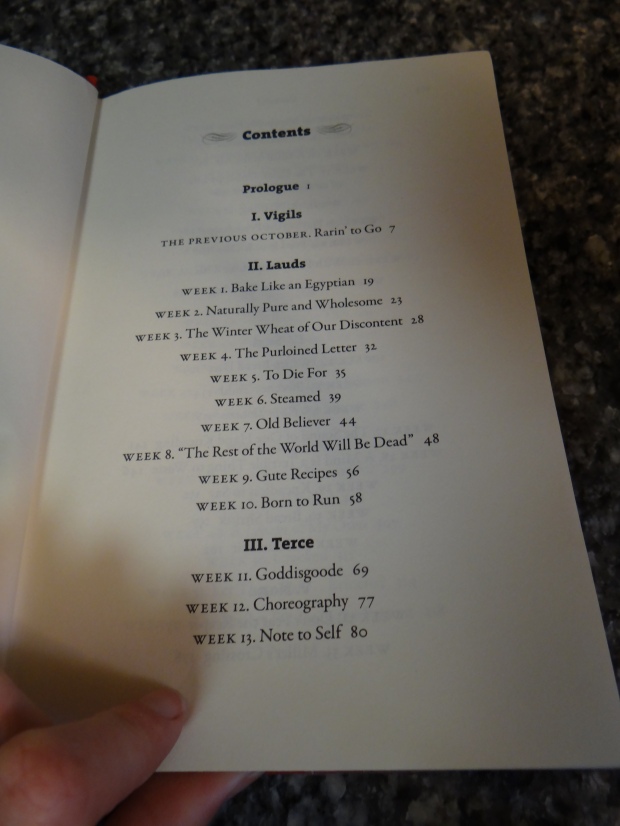 However, I decided to keep reading for one reason, and one reason only: Peter Reinhart and Jacques Pepin left reviews on the back cover.

It certainly wasn’t the first chapter that wowed me.  The writing felt gimmicky, like every other lazy 2010-era “The Year of fill-in-the-blank” bestsellers.  But I kept going, and was glad I did.  There was a reason he set up the book using the seven times of prayer, even if it was (a little) gimmicky.

So, as you could probably tell, the author commits to figuring out how to bake the perfect ‘peasant loaf’ as he calls it.  His investigation takes him to Maine, France, and Morocco; to state fair bake-offs, monasteries, and baking conferences.  Even though I feel like a pretty seasoned home baker, I learned a few things.  His discussion of the malnutrition epidemic of pellagra that resulted from industrial improvements in milling wheat and why flour in the US is enriched with niacin was fascinating.

More importantly for my purposes is that in the beginning, each chapter is a deep dive into the three main ingredients of bread – flour, water, and yeast.  I think that is so important in a beginner’s bread book, and most authors gloss over them, considering the topic fully covered in a page, if not a paragraph.  By devoting an entire chapter to each one, the reader really gets a familiarity with the ingredients.

The author visits a yeast production plant and a flour mill, grows, harvests, threshes and winnows his own wheat, and builds his own brick oven.

He also gets a chance to pay it forward with his newfound baking knowledge – but I’ll let you discover that for yourself.

I am currently working on Alexander’s pain de campagne recipe, so that blog post will be forthcoming.  Even though I didn’t come away from the book having changed my techniques at all, I do appreciate knowing all the work involved in building a homemade brick oven and growing your own wheat flour in case the mood ever strikes 😉

I still have several books to go in my investigation into beginner baking books, but this one is a definite contender.