This is my first recipe out of Rose Levy Beranbaum’s tome of a cookbook, The Bread Bible. 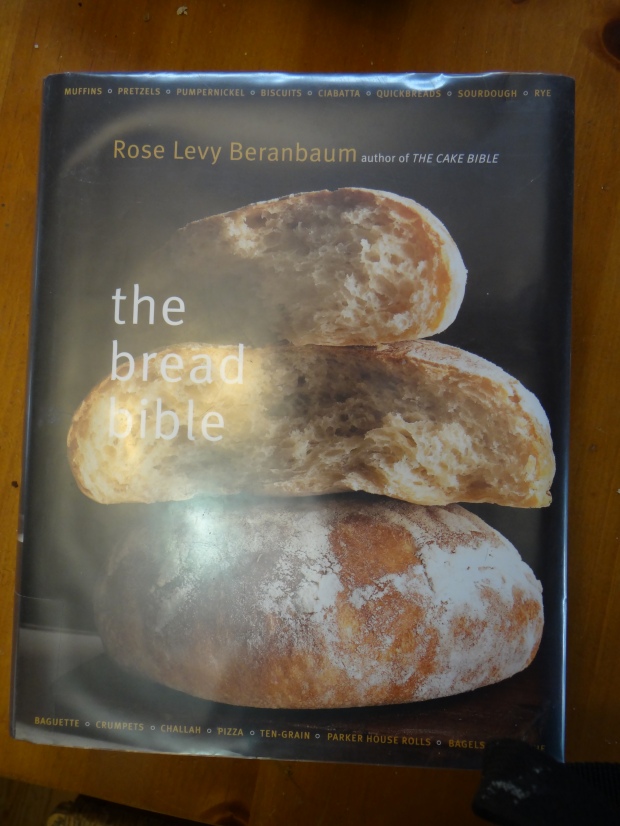 I have five recipes flagged to try out.  My review of her book is here.

Since I’m going to be a little occupied tomorrow, I decided to make a recipe that didn’t require a long rise or a poolish to start.  One of my flagged recipes, the sweet potato bread, would be ready in approximately 7 hours.  I’m off work today, so that’s what I picked. 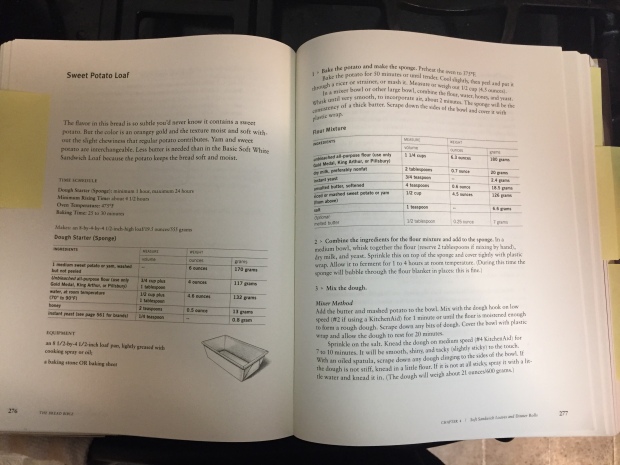 Another bonus is that it uses up some of our million sweet potatoes (thanks CSA!). 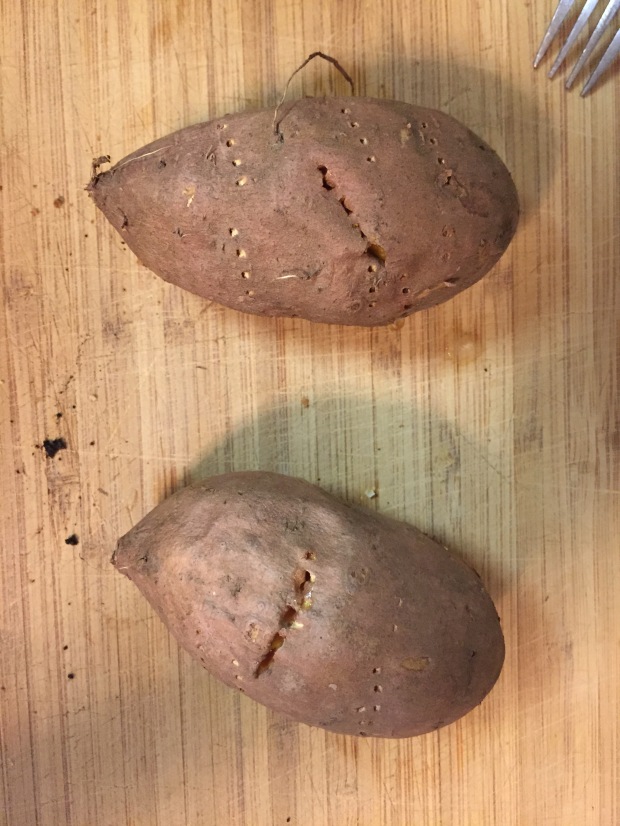 For this recipe (makes one loaf) you will need: 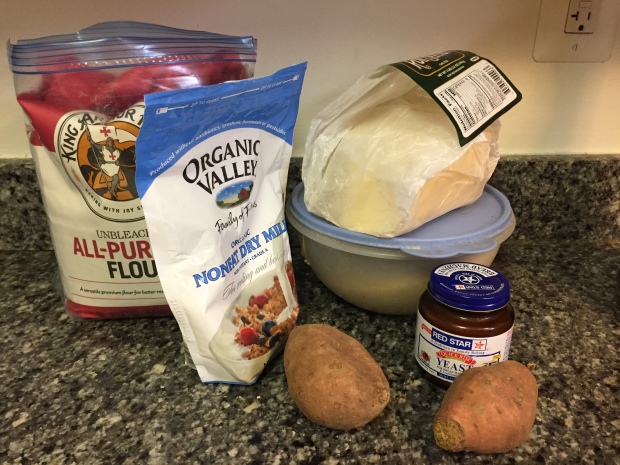 For the final dough:

Prick your sweet potato all over with a fork.  Bake in a 375 degree oven for 50 minutes until soft.  Remove from oven and let cool, then peel and mash.  Mix up the sponge in a large bowl and let rise for one hour. 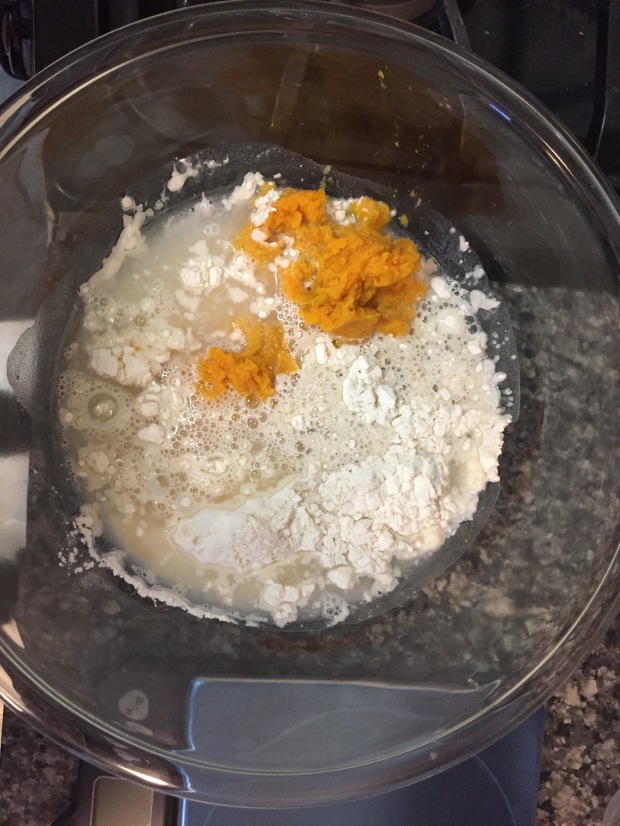 I totally messed this up and instead of measuring out my water, I dumped in a whole glass of water without thinking.  So my sponge was the consistency of a very thin batter, and I ended up having to add a ton of flour to the final dough to make up for it. 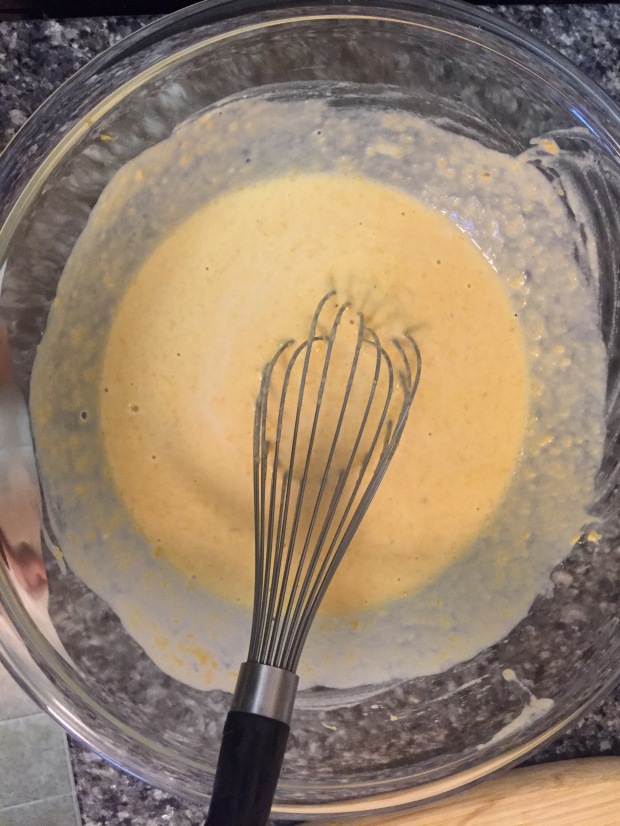 Now add your final dough ingredients to the sponge. 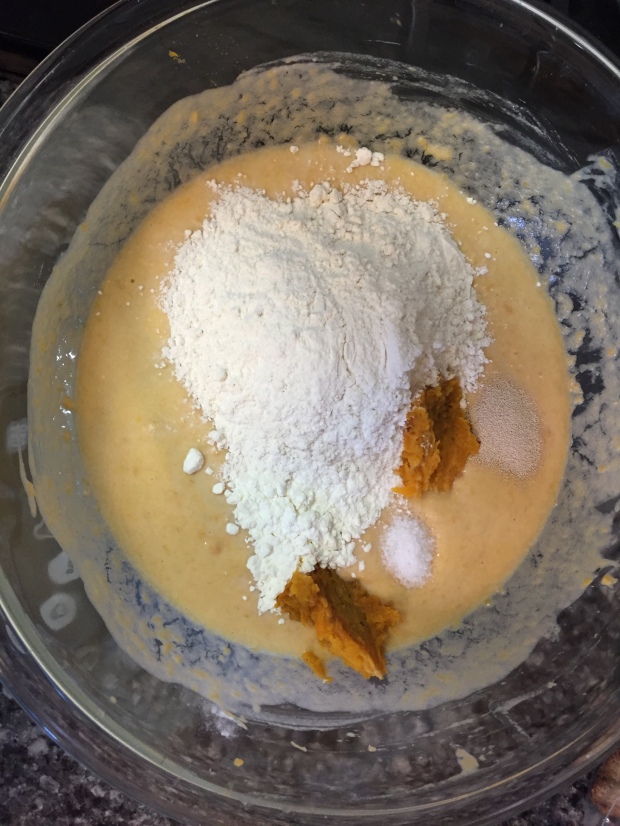 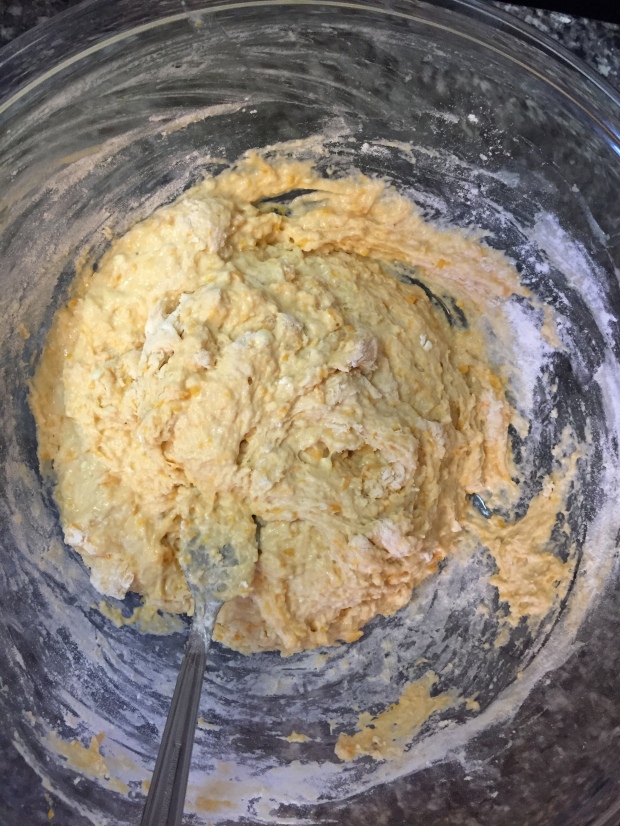 I probably added an additional two cups of flour to my dough.  I transferred it to my stand mixer and used the dough hook for 15 minutes or so.  Then, when it seemed like it just wasn’t going to have good structure, I kneaded in another half cup or so of flour on the counter with my hands.  When it was finally feeling like a good consistency and holding together, I let it rise for 2 hours in an oiled bowl. 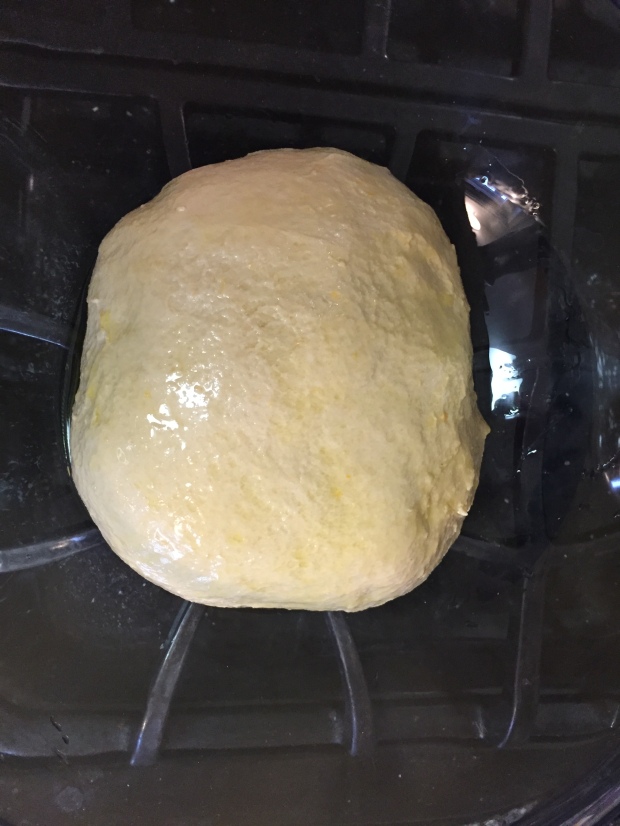 It rose very well, considering there was no observable activity in the sponge. 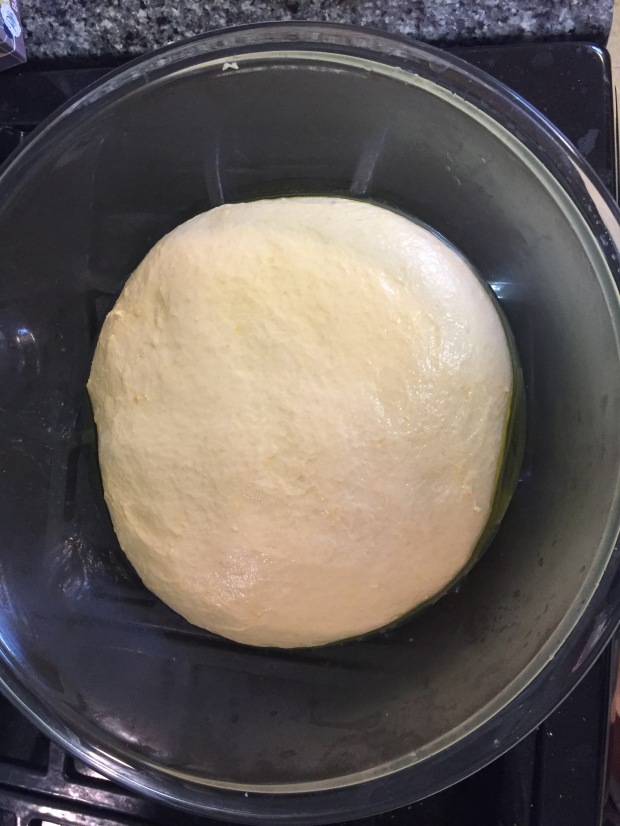 At this point, the recipe calls for gently folding the dough a very times and returning it to the bowl for a second rise of 1.5-2 hours. 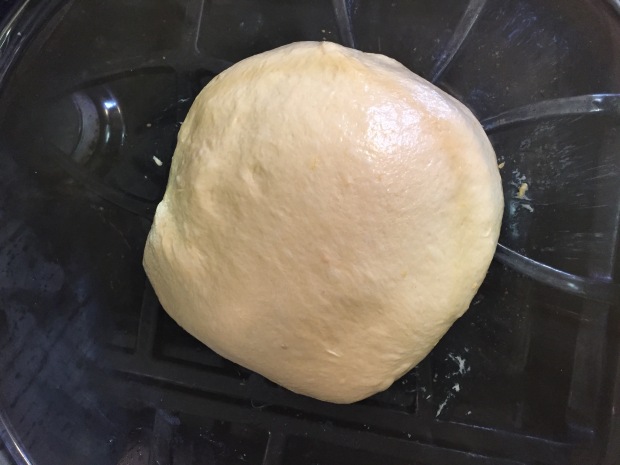 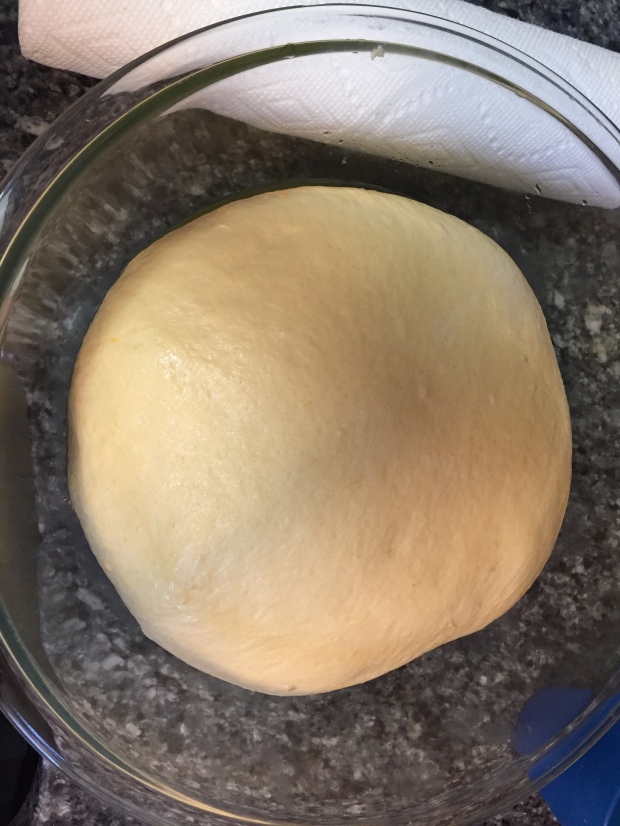 Then I gently rolled up the dough and transferred it to a large buttered bread pan for an additional 1.5-2 hours.  I covered it with a tea towel. 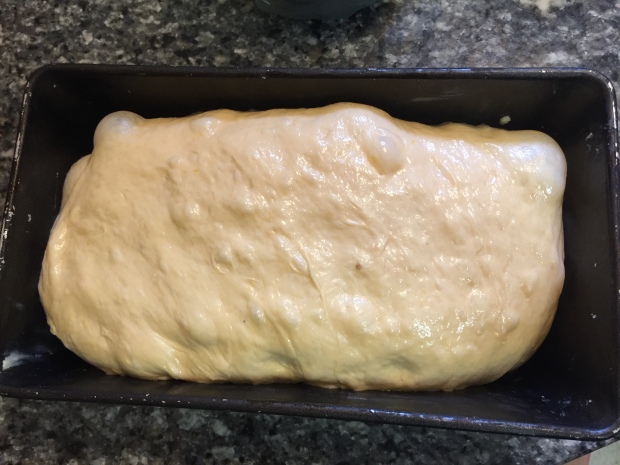 After 1.5 hours, I preheated the oven to 550 degrees F with a pizza stone on a low rack and a cast iron skillet on the floor of the oven.  After 2 hours, the dough looked like this: 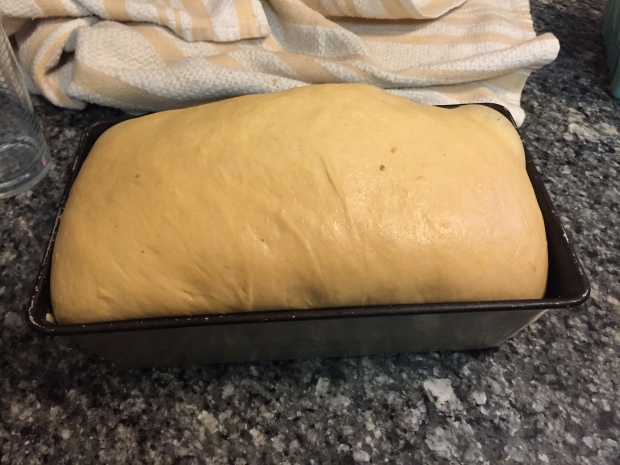 Beranbaum does not have you score the bread.  I put the bread pan on the rack with the pizza stone and threw about a cup of ice cubes into the cast iron skillet. 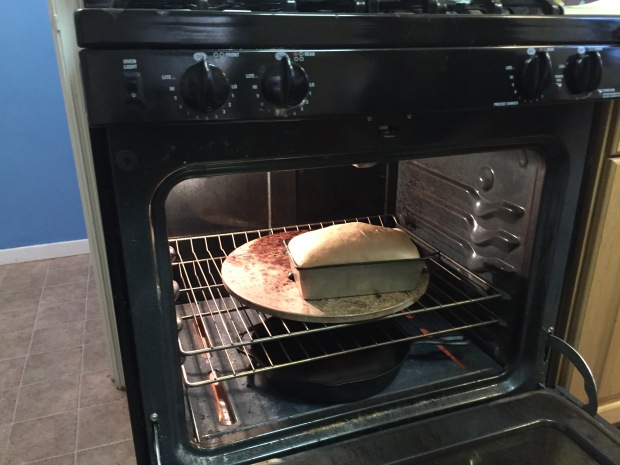 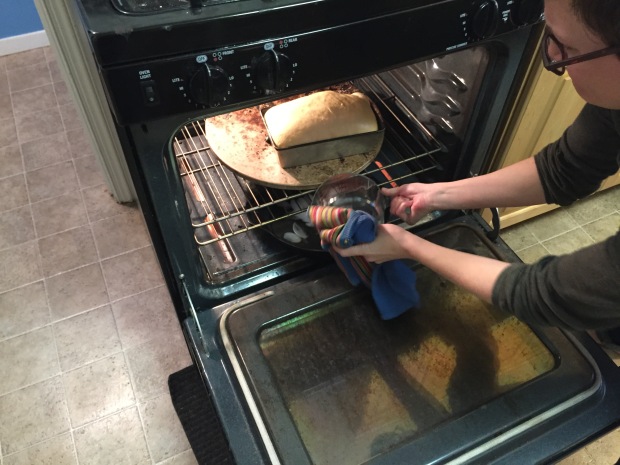 Then I bumped the temperature down to 475 degrees F and baked for five minutes. Then I bumped it down to 375 for 15 minutes, after which time I rotated the dough and baked an additional 25 minutes until it was golden brown and the top was hard. 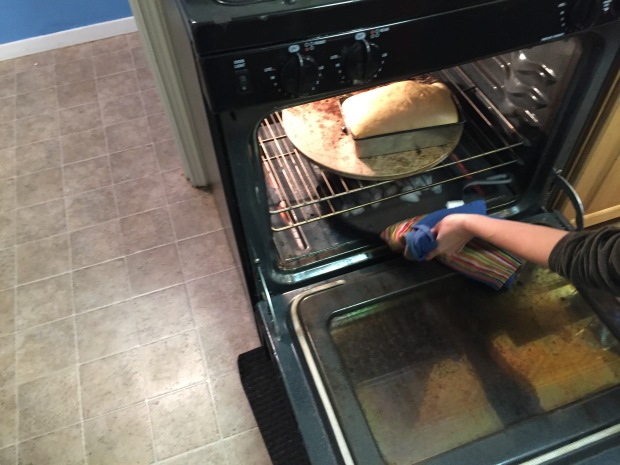 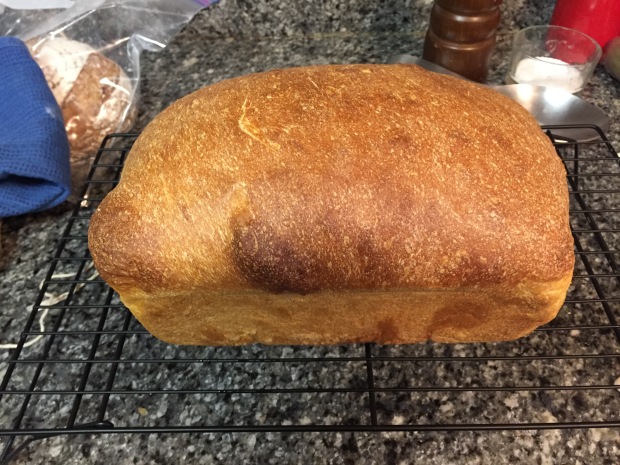 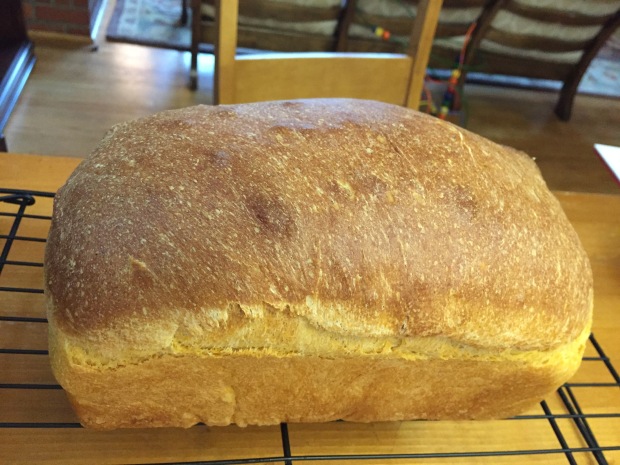 Sadly, I guess I didn’t take a crumb shot before it all got eaten.  Which is a shame because this bread was nice and golden inside.  It had a tight crumb and was very soft.  There was no hint of sweet potato flavor.  I used it for Little Bread Dude’s peanut butter and jelly sandwiches this week with no complaints.  If you have sweet potatoes to use up, this is a good recipe for that!