Now that I’m over the hump of the nine weeks, I decided it was time to get serious.

No more messing around.  I was going to follow Preston’s recipe exactly this time.  No mistakes.  No forgotten salt.  I would do each step; even the ones I found superfluous or downright mystifying (grinding the salt?).

And for the most part, I did.  I think I may have forgotten a bench rest somewhere in there.  But otherwise, this is probably the most accurate bake I’ve done.

New to this baking attempt are: grinding the salt, kneading the dough, and spritzing the dough with water before baking it.

To make Preston Yancey’s recipe this time, I used:

1150g of all-purpose flour, plus more for kneading
3.5 cups of warm water, divided into 2 3/4 cup, 1/4 cup, and another 1/2 cup because the dough was seriously dry
4 teaspoons of salt (come on, Preston.  One tablespoon and one teaspoon? Do you think I have all the time in the world to wash dishes?)
1 tablespoon of sugar
1 tablespoon of honey
2 teaspoons of yeast (or one packet)
1 tablespoon of oil

3. Grind your salt using a mortar and pestle.  Ponder why I am doing this.

4. When the yeast mixture is nice and bubbly, pour it over the flour and water mixture and knead to combine.  Now add the salt.  Add another 1/2 cup water if your dough needs it.

5. Lightly flour your counter.  Knead your dough for five minutes until it is nice and smooth. This step combines my two least favorite activities in baking: getting my counter and floor covered in flour, and kneading.  Don’t you know your bread will do that for you if given enough time, Preston???

Eh, this wasn’t as bad as I thought it was going to be.  The dough absorbed most of the flour as the gluten formed, so there wasn’t too much to clean up in the end.

6. Let your bread rest on the counter while you clean your extra-large bowl.  Coat the inside of the bowl with oil.  Shape your dough into a ball and place it smooth-side up.  Cover the bowl with plastic wrap and let rise for 2 hours, stretching and folding every so often, until doubled in size.

7. Take two clean cotton towels or cloth napkins and coat them with flour.  Place each inside a medium-sized bowl.

8. Divide your dough into two equal halves, then shape each one into a ball.  Place it smooth-side down into your proofing bowl.  Cover with the corners of the towel and refrigerate your dough for an hour.

10. Bake at 500 degrees F covered for 15 minutes, then bump the heat down to 450 degrees F and bake another 15 minutes.  Remove the lid of your dutch oven and bake a final 15 minutes, until the crust of your dough is very hard and the bread is nice and golden brown.

It turned out quite nicely!  And more importantly, because I remembered the salt, it was also tasty.  A minor quibble again is that the holes did not turn out very big.  Despite the small holes, the crumb was light and airy.  My family used it to sop up buffalo wing sauce. 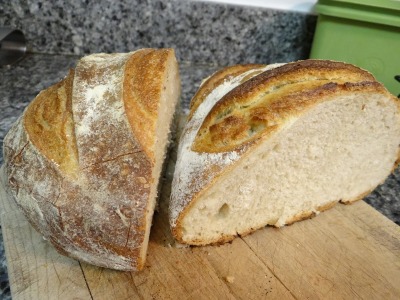 As hard as it’s been to follow the instructions, I think overall it’s been a good thing.  There are several improvements to my baking that I’m going to carry forward to my other recipes, namely the three-step baking process for crispy crust, the refrigerated proofing bowl method, and using a razor blade to score the loaves.
Sometimes it’s hard as a baking autodidact, because cookbooks aren’t always clear about why each step is important.  For a long time, I didn’t understand why you only lightly cover your dough with a towel during the final rise before baking.  I thought you were trying to keep in the moisture; I didn’t realize that you were trying to dry it out a little bit!  I also didn’t understand why you would use a couche or proofing bowl; now I know that it helps your dough (especially high hydration doughs) keep its shape during the final rise and not spread out too much.  That’s why I set out to document the science behind the baking process, so I could understand for myself and my readers what dough does.
In any case, I have learned a lot already from this process of making the same bread over and over again.  I probably would not have kept up with this recipe otherwise.